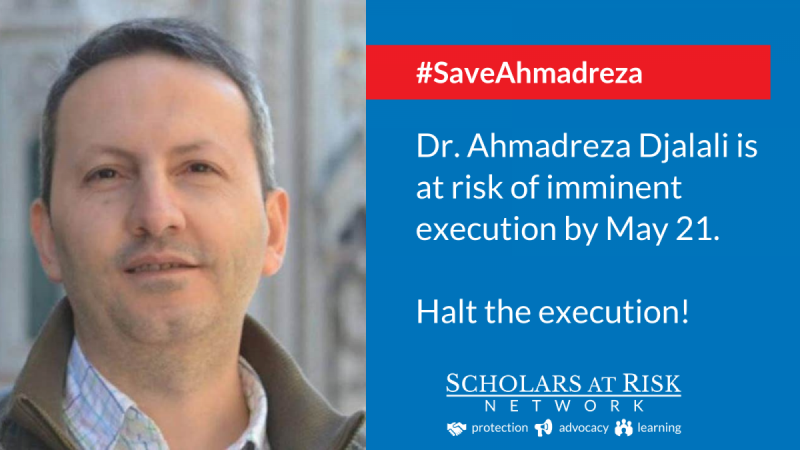 On the five-year anniversary of Ahmadreza Djalali’s arrest, the CRUI joins Scholars at Risk and the universities where he taught to demand once again his release.

On the five-year anniversary of Dr. Ahmadreza Djalali’s arrest, Scholars at Risk (SAR) remains alarmed at his continued detention and repeated denial of medical care, and encourages immediate action to rectify the human rights violations surrounding his arrest, detention, and death sentence.

Dr. Djalali is a prominent scholar of disaster medicine who taught most recently at Karolinska Institute, in Sweden. He held similar positions at the Università del Piemonte Orientale, in Italy; and Vrije Universiteit Brussel, in Belgium.

Clare Robinson, Advocacy Director at SAR, said, “We understand that Dr. Djalali’s health has severely deteriorated since authorities transferred him to solitary confinement in November 2020. His family fears that Dr. Djalali could die in prison if he continues to be denied the urgent medical care he needs.”

The three institutions call on the academic community to seek Dr. Ahmadreza Djalali’s release. “Dr. Djalali’s situation should concern scholars and society everywhere. He has been sentenced to death in apparent retaliation for international scholarly collaboration within his field of study. His wrongful prosecution and imprisonment, much like the wrongful prosecution and imprisonment of scholars and researchers like him, serves to endanger academic work, and deprives everyone of the benefits of scientific inquiry and exchange.”

While visiting Iran in April 2016 to participate in a series of workshops hosted by universities in Tehran and Shiraz, authorities arrested Dr. Djalali for “collaboration with hostile governments” and “acting against national security.” Dr. Djalali was subsequently detained in Evin Prison and intermittently held in solitary confinement.

On October 21, 2017, Dr. Djalali was sentenced to death for “corruption on earth” (ifsad fil-arz), based on unsubstantiated allegations that he had provided intelligence to the Israeli authorities. Dr. Djalali has disputed the allegations, asserting that his ties to the international academic community are the basis of his prosecution. SAR understands that Dr. Djalali has been denied the right to appeal the conviction and sentence, and has suffered torture, ill-treatment, and a growing number of medical complications while in state custody.

Scholars at Risk calls on Iranian authorities to suspend the capital sentence issued against Dr. Djalali and to secure his immediate release so he may receive the medical care he urgently needs.